The Bridge to Renewable Generation: A Fast Approach through Power Recovery 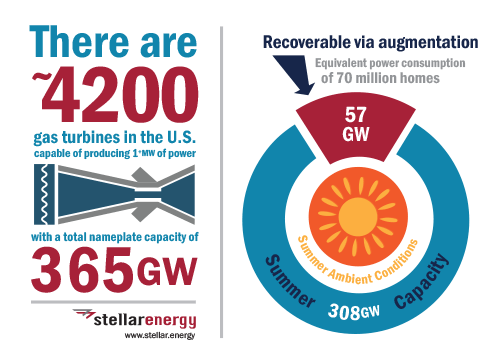 The power market has been subject to rapid changes over the last decade. Renewable generation capacity is contributing a measurable amount of power to the US grid and the growth rate of wind and solar installed capacity has increased by 11% annually from 2015-2018. Despite this growth, dispatchable power cannot be retired but needs to increase as well to support the intermittent nature of renewables. This is especially critical during the warm summer months where power grids are most at risk of not having capacity as a result of higher demand, and experience reduced production from combustion turbines. By making one key change, significant additional dispatchable capacity is available from the existing US combustion turbine fleet without installing more turbines.

Bridging the Gap with Dispatchable Power

A common narrative in this changing market is that as renewable capacity expands, fossil fuel capacity contracts. Though this is becoming the reality for heavy-carbon fuels like coal, natural gas generation remains the cleanest and lowest cost form of dispatchable power, and is required to bridge the gap between the historical generation mix and the projected generation mix. This need for more dispatchable power has resulted in increased proposals for US gas-fired combustion turbine plants. According to the US Energy Information Administration (EIA), in 2018 there were over 160 new combustion turbines proposed with a total nameplate capacity of nearly 37GW. For a sense of scale, in 2018 the US had a total installed combustion turbine capacity of 365GW, meaning that the newly proposed turbines (if all were approved and installed) would add 10% capacity to the existing installed base.

Despite the dispatchable nature of combustion turbines, the rated capacity of each of these plants is not consistently available during every day of the year. The lower capacity, or degraded capacity, is most evident during warmer days of the year while the higher capacity is realized during cooler days. Unfortunately, the fact of the matter is that combustion turbines generate more power when the ambient air is cold than when it is warm. The reason for this is that cool air is more dense than warm air, and passing cooler, denser air though a turbine increases the mass flow through the turbine, increasing the power produced. This mismatch in rated capacity and dispatchable capacity means that gas turbine power plants experience periods of limited—or unavailable capacity.

Looking more closely at the EIA data, we can see that the current summer capacity for the more than 4,000 installed combustion turbines is about 308GW; 57GW less than the nameplate capacity of the turbines. This data shows that during the periods of highest demand (warm summer afternoons), the installed base has a capacity that is 57GW less than what the equipment is capable of producing, at its rated conditions. Turbine Inlet Air Chilling (TIAC) is a technology that mimics cold day operation of a gas turbine during a hot day, effectively recovering the power that is lost due to hot ambient conditions. Simply put, TIAC has the opportunity to increase the summer capacity of the nearly 4,200 US gas turbines by 15%. This can be done without installing new turbines or pursuing new air permits.

A final observation from the EIA data is that the 37GW of gas turbine capacity proposed for new installation in 2018 represents two-thirds of what could be achieved by installing TIAC on the existing units, at a fraction of the cost and many times faster. This data reveals the abundant capacity available from the existing US combustion turbines; it just has to be recovered.