Heavy Lifting Causes Pain! How to Protect Your TIAC System from Surge

As the true work horses of a TIAC system, chillers are very good at moving the heat from the process water system to the heat rejection system in very large quantities as long as the variables of the process water and heat rejections systems stay within the design limits of the chillers. If these variables venture outside the design limits, the chillers can experience a condition called surge which can cause damage to the chiller’s compressor.

Generally, two pressures exist in a chiller system: the evaporating (low) pressure and the condensing (high) pressure. The chiller compressor draws the refrigerant 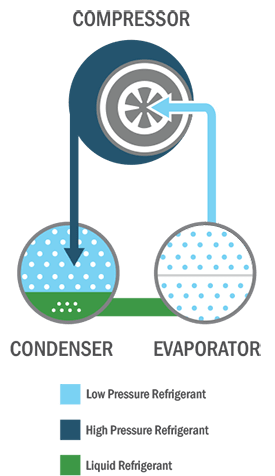 from the low-pressure evaporator and forces it into the high-pressure condenser. The difference between the two pressures is called lift.  Each compressor is designed for a specific lift based on the process and ambient design conditions. When the pressure differential, or lift, is greater than design, surge will occur. Surge is when pressure in the condenser rises too high for the compressor to overcome and the refrigerant vapor in the condenser rushes back through the compressor to the evaporator. This sudden rush of gas and release of pressure results in mechanical forces on the compressor which, over time can cause considerable damage.

What causes too much lift?

A number of things can cause too much lift and surge. The most common problem is with the heat rejection system, whether it be a cooling tower or air cooled heat exchanger. Reduction in cooling water flow due to blockage or pump issues will decrease the chiller’s ability to get rid of the heat and cause the condenser pressure to increase. Likewise, if there is a problem with the fans or cooling media, the heat rejection system will run inefficiently and cause the temperature of the return cooling water to rise which causes the condenser pressure to increase.

Not enough load, or low chilled water return temperature, will cause the evaporator pressure to fall since the compressor is still trying to pull the refrigerant vapor. If condenser pressure remains constant, the low evaporator pressure will also cause too much lift and surge will occur.

Another cause of surge can be from the chiller. A low refrigerant level will cause low evaporator pressure while too much non-compressible gas in the refrigerant will cause high condenser pressure, creating high lift and surge.

How do you reduce lift?

The way to protect a chiller from surge is to decrease the lift. This can be done by either increasing the leaving chilled water temperature to the process or decreasing the return cooling water temperature from the heat rejection system. If the heat rejection system is unable to remove the heat from the cooling water, the managing control system may need to increase the leaving chilled water setpoint to a value that keeps it out of the high lift threshold.  This value is dependent on the chiller manufacturer and model.

Another way is to fit the chiller with a variable speed drive on the compressor motor to modulate the compressor speed during low load conditions. In addition, chillers can be fitted with hot-gas bypass systems that create a false load on the evaporator by bypassing some of the hot refrigerant vapor from the condenser to the evaporator.