Stick-Built or Modular Design for Power Plant Projects? Actually, Both.

More than 10 years ago, power plants were traditionally stick-built, with each building custom designed and made for that particular plant. The major benefits of this approach were maintenance access and lowest equipment pricing, since a substantial portion of the work was being completed in the field.

The result was the rise of a new buzzword: Modularity. This concept eliminated (or mitigated) all three of these factors – increasing acceptance and popularity of modular design. For the next several years the focus shifted to these concepts:

This philosophy continued to dominate the industry for the better part of a decade, and in some cases still does.  However, as these highly modularized plants start reaching mid-life, maintenance requirements are increasing. As plant personnel attempt to perform these services they are introduced harshly to one of the biggest weaknesses of modularization: ACCESS. There simply isn’t enough space to perform the required work, which means intended ‘permanent’ structures or equipment is being temporarily relocated to improve access. This inevitably increases the time and cost of maintenance. The result is that during the next planning phase, there are often decisions made resulting in sacrifices between aspects of stick-built versus aspects of modularization.

Let’s look at the pros and cons of each: 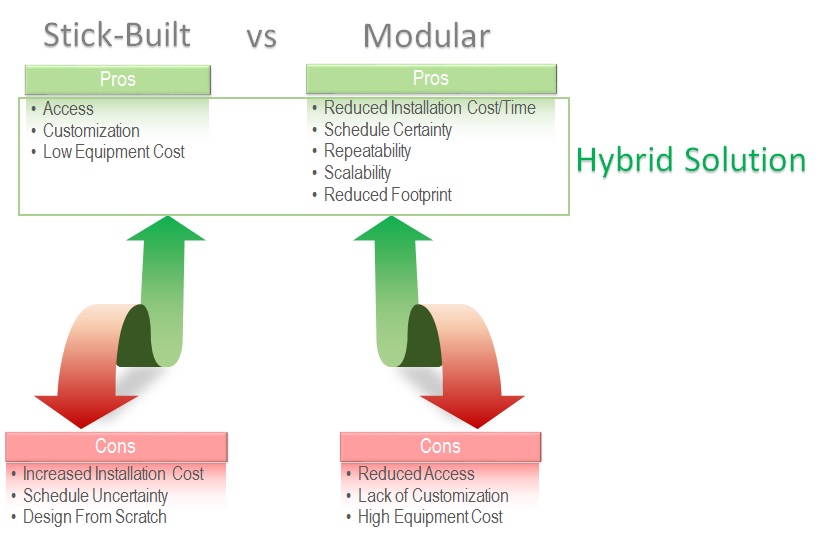 There will inevitably be examples from the ends of the spectrum, both where traditional stick-built has its merits and where full-blown modularization is required.  However, for the majority of projects falling in between these extremes it’s time to evolve the thinking of the either/or, mutually exclusive relationship to a hybrid design that offers the best of both stick-built and modular.  While the general philosophy should be identified, customization and maintenance access need not be sacrificed for project schedules and scalability.  Instead of breaking the mold, let’s just evolve it.