While both Supplementary or Duct Firing and Turbine Inlet Air Chilling (TIAC) are solutions to offset the megawatt output degradation of gas turbines when ambient temperatures rise, the two technologies take very different approaches.  With TIAC, the combustion gas turbine inlet air is chilled. In the case of duct firing, injection of fuel is utilized to increase the temperature and mass flow rate of the exhaust gases.

Rather than competing, the two technologies – duct firing and turbine inlet cooling – can actually complement each other when used correctly.

For maximum power output, power plant owners can utilizing the reliable power augmentation provided by TIAC, and balance the requirements with duct firing.  This scenario allows them to produce the required power at the lowest possible heat rate.

However, the combination of TIAC with Duct Firing is rare – most owners choose one solution over the other. Let’s look at how Duct Firing works. 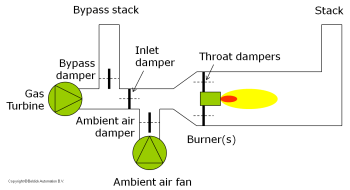 Supplementary (Duct) firing may be used in combined cycles in the HRSG – raising the exhaust temperatures from about 1112F (600 °C) at GT exhaust to about 1472F (800°C) or even 1832F (1000 °C). Using supplementary firing will however not raise the combined cycle efficiency for most combined cycles. Supplemental firing is often used to improve peak power production of the unit, or to enable higher steam production to compensate for failure of a second unit.

Maximum supplementary firing refers to the maximum fuel that can be fired with the oxygen available in the gas turbine exhaust. The steam cycle is conventional with reheat and regeneration. Hot gas turbine exhaust is used as the combustion air. Regenerative air preheater is not required. A fresh air fan which makes it possible to operate the steam plant even when the gas turbine is not in operation, increases the availability of the unit.

More fuel is sometimes added to the turbine’s exhaust. This is possible because the turbine exhaust gas (flue gas) still contains some oxygen. Temperature limits at the gas turbine inlet force the turbine to use excess air, above the optimal stoichiometric ratio to burn the fuel. Often in gas turbine designs part of the compressed air flow bypasses the burner and is used to cool the turbine blades.

Perhaps the biggest factor for power plant owners looking to reclaim lost megawatts, especially during the high demand summer season, is that it’s virtually impossible to retrofit an existing plant with Duct Firing. On the other hand, a Turbine Inlet Air Chilling system retrofit is easily done during a planned plant outage.

For new plant design and construction, the following should be considered when deciding if Supplementary or Duct Firing is the right power augmentation choice: